“From problem to prototype.”

Never run for another bus again! With BusyBus, plan your commute with peace of mind. You'll be alerted when it's best to start walking to your nearest bus stop while also viewing real-time updates. 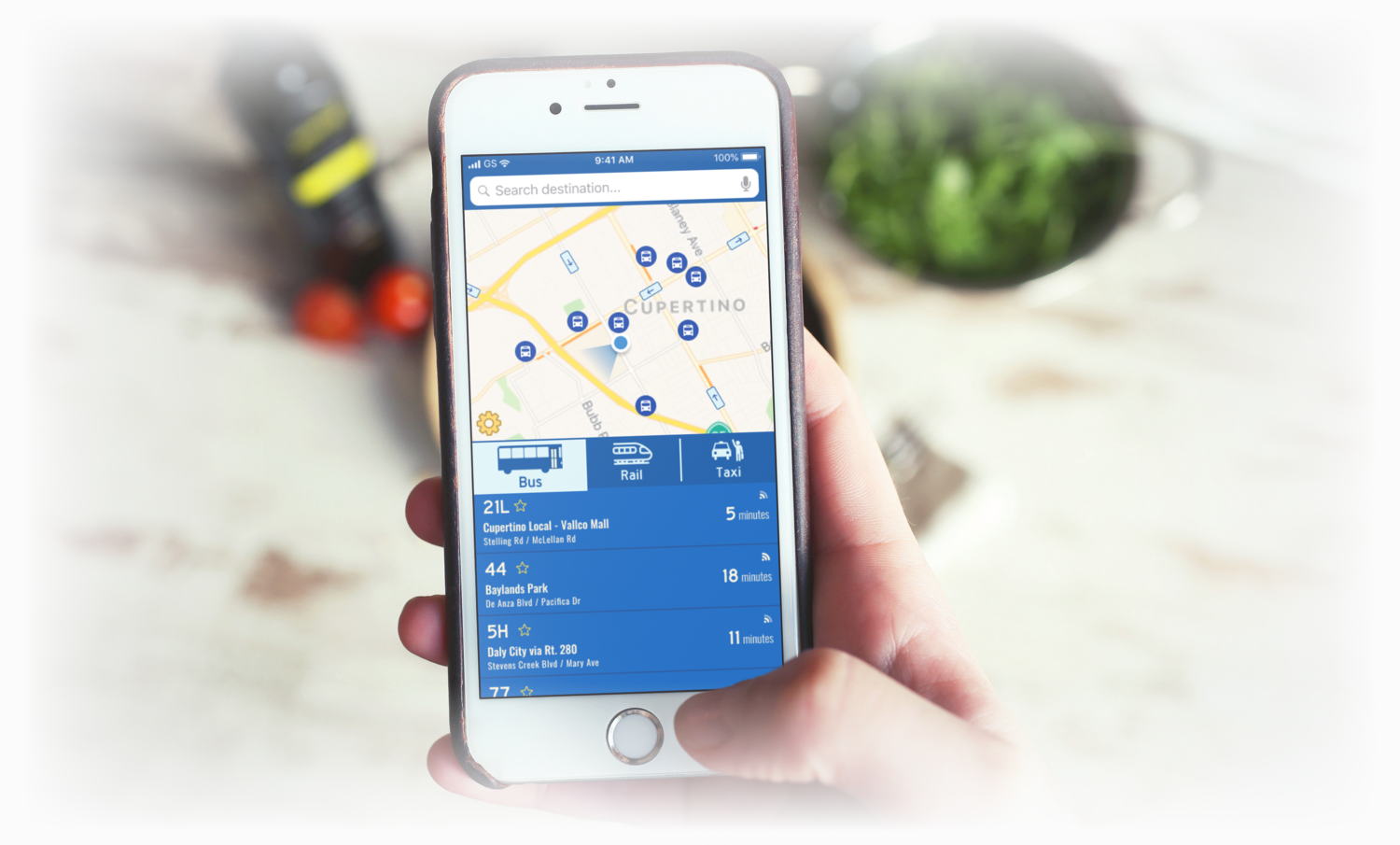 Transit officials identified a problem they would like to solve. Due to expansion, numerous bus routes were recently added and many of those routes stop at the same bus stop. Riders want to know what the next arriving bus is and how much time they have to get to the bus stop. Riders and residents are frustrated and want to know where their bus is, when it arrives, and how long until it departs.

BusyBus was developed with the aim of providing residents and commuters with a technological solution that provides a more seamless and hassle-free public transportation experience. By combining basic design principles with an intuitive layout, BusyBus’ interface lets users know in real-time when their desired buses will arrive. Users will also be informed of which routes are inactive.

A Day in the Life of a Rider

From a survey of 32 people, most people do not use the bus as their primary mode of transportation (81.3%), while 18.8% reported that they do. Focusing primarily on bus riders, 50% use it daily while 50% use it a few times a week, mostly for getting to work. Most riders walk no more than 5 minutes from their homes to their stops (83.3%), but time spent waiting for the bus varies; 16.7% spend 0-5 minutes, 66.7% spend 6-15 minutes, and 16.7% spend 16-30 minutes waiting. This is where improvements can and must be made; the graph below shows what ways users' experience using public transportation apps can be enhanced:

Bus riders will benefit from having real-time updates so they know when to expect buses, and would like to track them in real-time (similar to how Lyft and Uber rides). Users also wish to know when to begin heading to their stops, and be notified of any changes in the expected time of their bus. This will reduce wait times, diminishing a major pain point. In the event of a signal failure, users would also like offline access to schedules and routes so they have some idea of when to begin moving. For added convenience, and because not all apps have this feature, an in-app payment option will attract more users.

Transit provides local real-time route updates and bus stop locations. It is easy to see when local buses are coming, and the next time they will arrive. It plays with colors outside of its branding to distinguish different routes and transportation types (e.g. MTA subway lines). It is mobile-only, and only serves about 200 major cities and transit hubs worldwide, thereby restricting its usability.

Google Maps is the most popular transportation planning service, given its name. It is also much more easily accessible wherever you are and on any device. While it does employ color to highlight selected routes, as well as transit iconography (e.g. MTA subway lines and bus routes), the interface itself is more monotone than other competitors.

Mapping Our Own Route

How do we measure success for BusyBus, taking competitors and user requirements into account? I created a list of 12 user stories that were most important in establishing a minimum viable product, including being able to see real-time updates, notifications or approaching buses, and adding items to a 'Favorites' list. From this list, I created a user flow that integrated as much as possible to test out general functionality.

Going for a Test Drive

Time to sketch and test! Using a templated worksheet, I sketched out three screens that adhere to my user flow and performed usability testing on this paper prototype with three subjects. I experimented with including other forms of transportation for users who may want to explore those options, similar to Google Maps and Transit. I asked them to select and confirm a bus route. They each had varying levels of technological proficiency, allowing for broader perspectives on what could be improved. I noted the following points of feedback: 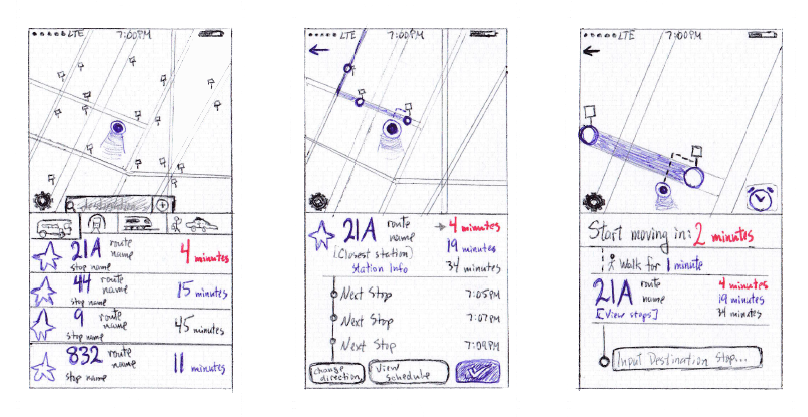 I wanted to convey to riders that they can trust and be excited about public transportation. I therefore used shades of blue as my primary color palette (blue denotes trust and security) and shades of yellow for my secondary palette to emphasize enthusiasm. I used a Highway Gothic for my brand type and Oswald as its complement. Highway Gothic is used for US highway signs, and thus felt appropriate to use for this project. I applied this type to the search field text, route numbers, and the times' numerical displays. All other text used Oswald with 5% letter spacing.

In designing the logo, I utilized the front portion of the bus icon I drafted for the in-app selection button. The word "busy" can be associated with "buzzing about," moving from one point to another to accomplish a task. This led me to include three triangles tailing the bus to symbolize movement. When it came time to code, the Overpass type on Google Fonts functioned as a very close alternative to Highway Gothic, which was local to my device. 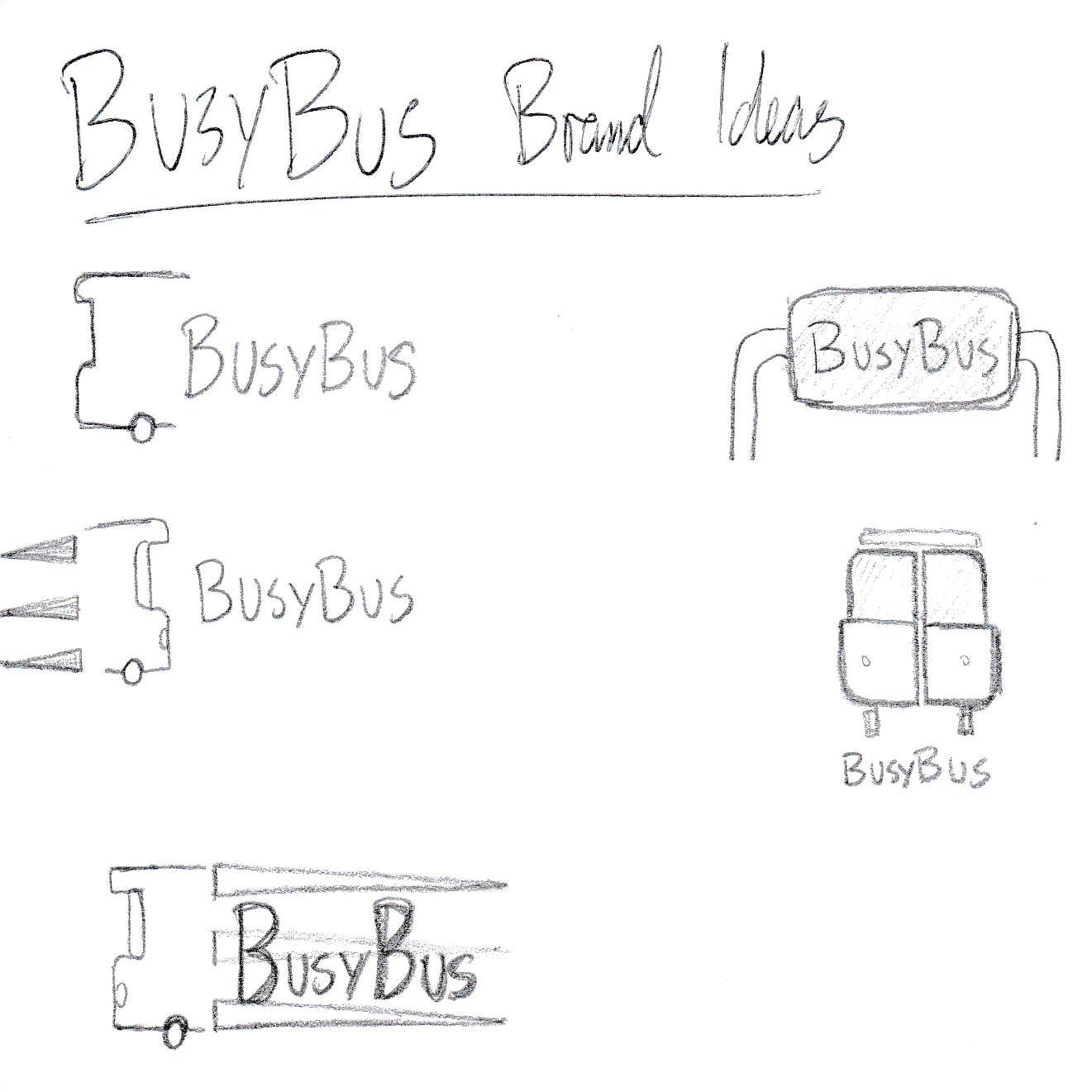 Blues are used for containers, large buttons, and some icons. Yellows are applied to text and smaller icons.

BusyBus brand favicon and app icon wouldn't include the name.

When creating the visual prototype, I combined the subway and train buttons into one button based on user feedback. On my sketches, I reserved space for route names to be next to their numbers, but I realized it won’t be feasible here. I instead placed the route name under the number, and above the stop name I applied a darker background with lighter text. Some aspects of my sketches did not translate as well to the visual design as I anticipated, and thus the design underwent a second iteration. Some points of feedback from other designers were as follows:

I wanted to see how well my design would translate into code. Using Atom, I coded the HTML and CSS for BusyBus' homepage. When looking back to my design in Figma, I noted that the settings icon bled into the map, making it difficult to spot. As a result, I altered the color and look of the icon, using blues for the background and outline, and a drop shadow. I felt it was unnecessary to add labels to the buttons; they are self-explanatory. The route data was also restructured to display based on direction, with reroutes and out of service lines at the bottom of the list. I added a cap on the page width to see how everything would expand from mobile to larger displays.

Looking in the Rear View Mirror

Spacing and font manipulation were among the biggest challenges going into the visual design of BusyBus. This demonstrated the importance and value of iterative feedback. This project felt different from others in that it was very focused on a very specific issue, requiring only one task to be tested. Manipulating space was also a challenge during frontend development, and coding the transit type buttons to invert colors on hover/tap presented an entirely new challenge in itself. It required use of .SVG files that I was able to download from my Figma project and manipulating the source code to get the desired effects.

For future consideration, I would build in a toggle between dark and light mode, giving riders more control of their viewing experience. I would also continue experimenting with typography to see if there are better hierarchies I can apply. Ultimately, BusyBus does answer the problem statement by giving users accurate and real-time updates for local routes, assuaging any concerns they have about missing their bus.